Some random pictures from the Swedish Nationals.

Email ThisBlogThis!Share to TwitterShare to FacebookShare to Pinterest
Labels: Liveshow

No liveshow is complete without some addition to the collection. Below you can see my haul from the show. I got 3 rosettes, 2 champions and one reserve. I also added no less than seven models to the collection (4 won by my models, 1 bought from another collector, 1 bought at the auction held and one won in the lottery). I also won a gift card on a stablemate repaint from a Swedish artist in the lottery. I haven't decided what model I want painted yet but I have some ideas :) 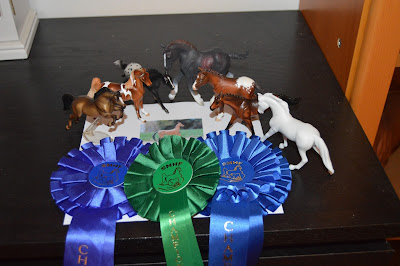 The three models below will be painted/repainted. The shire foal might be baby black but I haven't decided yet :) And as for the other two I'm not quite sure on colours yet. 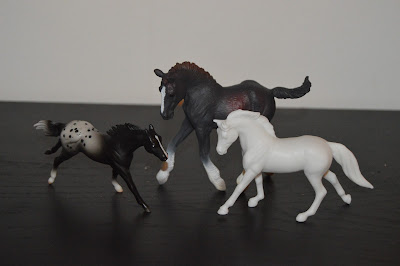 These two models are a bit special to me. The one on the left (Sm. G2 ASB rep.) was in the auction held during the Swedish Nationals. I have seen this model at shows before and always wanted to add her to my collection but never had the money to do so. So when I saw her in the auction I decided that I would get her. I obviously did :) The thoroughbred is made by the same artist who painted the ASB and I saw her at the sales table and early on decided that I would buy her.

The little jumper I won will be kept OF and added to my unintentional G3 jumper conga. 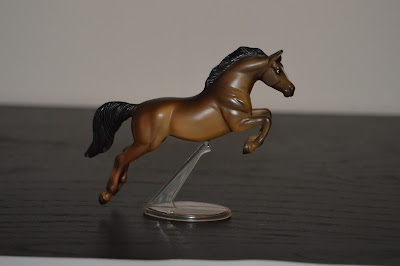 The model I won in the lottery was also one I had my eyes on one time. I saw this model at my very first liveshow back in 2006. She won the bendables show (picture below) there and I thought her to be supercute. I thought about her, from time to time but haven't seen or heard about her since that show so when I saw her on the lottery table I hoped that I would get her, I was so happy when I did!

Next post will be some random liveshow pics :)
Posted by TiMe at 6:07 PM No comments:

I wasn't entering in the Fantasy show but that doesn't mean that I can't enjoy the entries :)

The next posts will mostly be pictures and not as much text as I don't have too much info on the entries but I thought they were super cool and just had to share :)

TiMe
Sweden
I'm a 25 year old woman from Sweden. I enjoy life balancing my work with my hobbies, boyfriend, family and friends.

All pictures are © by me, TiMe, unless otherwise noted. Copyright on pictures not taken by me, belongs to the owners and I've used them with permission.
If you would like to use any of my pictures you'll need my permission.