How to tie a rope halter

When trying to find different modelhorse tack and props that I could try to make I got the idea of trying to tie my own rope halters. I've seen other hobbyists tie great rope halters and I've been very inspired by them. So I began by searching for some kind of tutorial on how to tie a rope halter and I found a great one in Swedish with measurements and very clear instructions. Unfortunately the site does not exist anymore.

Fortunately I found a blog with pretty much the same instructions as the first site I found. It's written in Swedish: http://horsebalance.blogspot.se/2010/10/dagens-tips-repgrimma.html

I've only tried to make rope halters for traditional size horses to this date but when I find "rope" that will work with the smaller scales I'll try tying halters for them too.

The horse that will be my model for today is Anything But Mine. 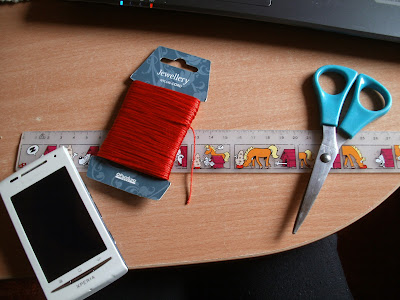 The first thing to do is to have our supplies ready. Tying a rope halter doesn't require a lot of supplies. You'll need thread, a pair of scissors, a ruler and a calculator. I couldn't find a calculator so I used my cellphone.

The next thing to do is to cut your thread. To know how long it needs to be I used the measurements on the blog I linked above. It says that for a horse you'll need 6.5 m of rope (that's for a REAL halter) and since I'll make a halter for a traditional size model (approximately 1:9) I'll divided it by 9.

That's how much rope you'll need so just cut it off :)

Before we start to tie, one of the ends need to be a little longer than the other. For a real halter the longer end would be 80cm and for a traditional size model horse:

I made it very simple for myself and put one end of the rope at 8.9cm and the other at 0cm. As you can see on the picture below: 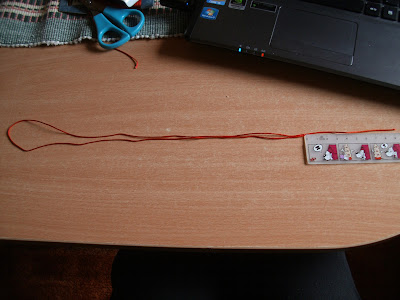 Take a small piece of thread and tie a simple knot in the middle of the loop that is created if you put it like the picture above. That knot will help to get a good start.

Make sure to have the longer end of the thread on the horse's left side and put the knot as pictured: 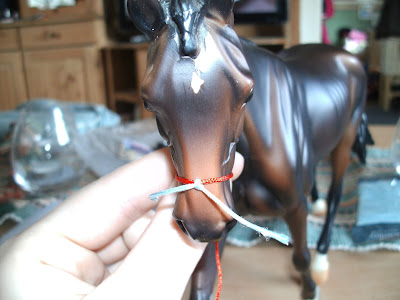 With the knot still in place as above, tie a simple knot at the side as seen below: 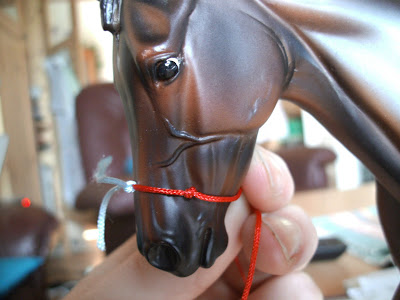 Do the same on the right side. It should look something like below: 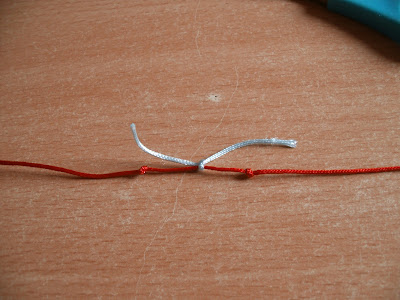 If you want to, you can remove the "extra" knot (the light blue one). I like to keep it on because I think it's easier to see that the halter stays in place when tying.

When you've tied the simple knots on both sides it's time to tie the knot under the chin. You could do a fiador knot for this, but since I haven't got the hang of it yet (patience is a virtue I am not possessing) I am doing a simple knot with both of the threads to create a little loop under the chin, as pictured: 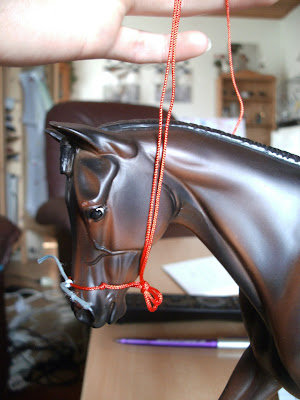 Do another simple knot with both threads further up: 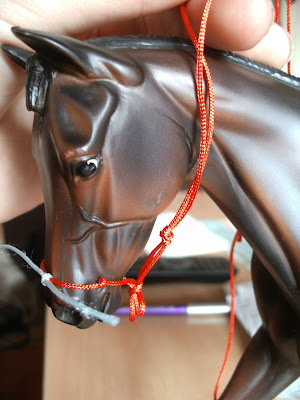 Take the shorter end of the thread and put it out of the way on the right of the horse as we wont use it right now. Take the longer strand and do a simple knot with a loop: 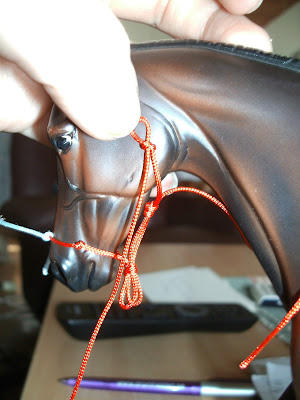 Now is a good time to remove the light blue knot. Then carefully, without moving the knot too much, untie the first knot we did slightly so you could stick the end from you latest knot through the first, see below: 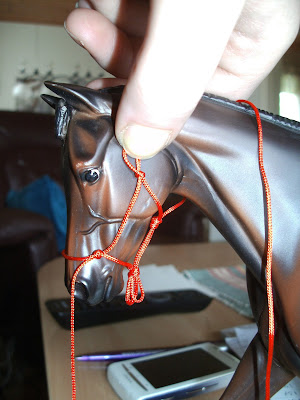 Take the strand over the nose and carefully, slightly, untie the knot on the other side and put the strand through that one as well. It should look something like this: 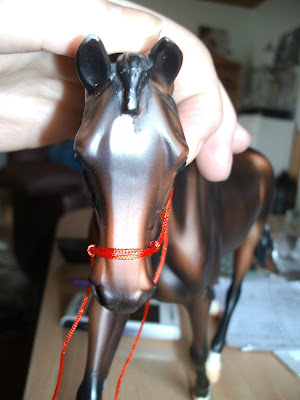 Take the strand we put away on the right side earlier and the strand we just worked on, tie those together with a simple knot with both strands. Put both strands over the poll and tie to the loop on the left side. 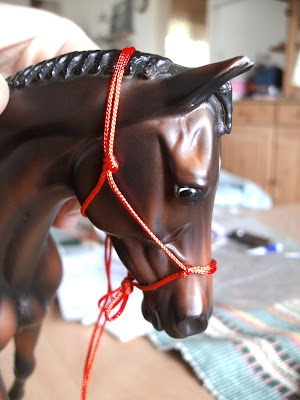 Cut the ends at desirable length and slightly burn the ends with a lighter if you feel you need to.﻿ 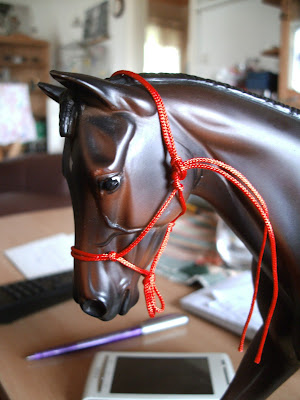 That's it! :) The tutorial might not be the best, I know my skills in explaining to others aren't great, but hopefully you understand something or you at least enjoyed the pretty model horse :)

TiMe
Sweden
I'm a 25 year old woman from Sweden. I enjoy life balancing my work with my hobbies, boyfriend, family and friends.

All pictures are © by me, TiMe, unless otherwise noted. Copyright on pictures not taken by me, belongs to the owners and I've used them with permission.
If you would like to use any of my pictures you'll need my permission.